In this study, a 3D finite element model is developed to investigate the drilling process of AISI 1045 steel, and particularly, the heat and wear on the drill faces. To model drill wear, a modified Usui flank wear rate is used. Experiments are used for the verification of the simulated model and the evaluation of the surface roughness and built-up edge. A comparison of the predicted and experimental thrust forces and flank wear rates revealed that the predicted values had low errors and were in good agreement with the experimental values, which showed the utility of the developed model for further analysis. Accordingly, a heat analysis indicated that approximately half the generated heat in the cutting zone was conducted to the drill bit. Furthermore, material adhesion occurred in localized heat areas to a great extent, thus resulting in wear acceleration. A maximum flank wear rate of 0.026 1 mm/s was observed when the rotary speed and feed rate were at the lowest and highest levels, respectively. In the reverse cutting condition, a minimum flank wear rate of 0.016 8 mm/s was observed. 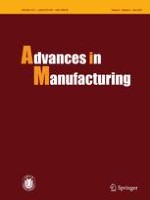 State of the art of bioimplants manufacturing: part II