This study explores a bibliometric approach to quantitatively review carbon cycling research and statistically assess its developments and trends during 1993–2013. Articles referencing carbon cycling from the Science Citation Index Expanded (SCI-EXPANDED) database were analyzed by accessing the following: publication pattern by year, publication performance by country and institution, publication performance by journal, linguistic diversity, publication type, and keyword analysis. Results show USA was the leading country in carbon cycling research (contributing 47 % to worldwide publication) while China showed a marked increase in past 10 years. Europe has the most countries that are actively involved in carbon cycling research. The Chinese Academy of Sciences was the No. 1 most productive institution in the world and contributed 51 % to papers accomplished by China. Topics identified in this study, such as climate change, soil respiration, Arctic region, increased in popularity during the past 20 years. Research techniques such as remote sensing, eddy covariance, and radiocarbon are more frequently used in carbon cycling research in recent times. Although topics such as carbon dioxide and methane are still vital to climate change research, their relative popularities (compared to other topics) declined over the past two decades, indicating more diverse topics (such as decomposition, respiration, Arctic, fire, etc.) will be investigated in the coming decade. Uncertainty assessment achieved an overall 80 % similarity in keywords analysis and demonstrated that within a given research field (carbon cycling in this case), the bibliometric analysis is mostly robust to the uncertainty in choosing keywords. 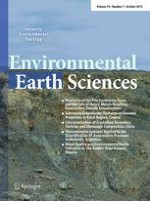