In this paper, we review three influential theories of imagination in order to understand how the dynamics of imagination acts could be modeled using formal languages. While reviewing them, we notice that they are not detailed enough to account for all the mechanisms involved in creating and developing imaginary worlds. We claim those theories could be further refined into what we call the Common Frame for Imagination Acts, which defines a framework that can be used to study the dynamics of imagination using formal languages, and we support our claim by showing how the framework allows to model certain imagination acts step by step. Then, we introduce the Rhombus of Imagination, which is a visual tool that can be used in conjunction with our framework to study the procedural structure of different kinds of imagination acts and identify their dynamic properties. 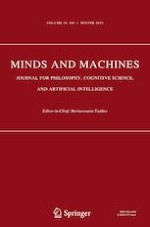 The Design of GDPR-Abiding Drones Through Flight Operation Maps: A Win–Win Approach to Data Protection, Aerospace Engineering, and Risk Management

Algorithmic Decision-Making and the Control Problem

A Misdirected Principle with a Catch: Explicability for AI

Ethics of AI and Cybersecurity When Sovereignty is at Stake