In the present work, a novel method of ultrasonic-assisted double-pulsed electro deposition was innovatively used to prepare nanocrystalline Ni coatings from a modified Watts–Nickel electrolyte without and with the addition of CeO2 nanoparticles. The dynamic oxidation kinetics of pure nickel and the Ni–CeO2 coatings was conducted in air at 650 and 850 °C. To clarify the beneficial effects of CeO2 addition on surface morphologies, phase composition and microstructural evolution, the as-received coatings were investigated using various analytical techniques of FE-SEM, XRD, XPS, and HR-TEM observations. In addition, both EDX maps and TG–DSC scans were also carried out for further evaluating the effective bonding effect that generated from the Ce-rich precipitated phase on the inhibition of coarsening growth and textural transformation. Meanwhile, an analytical model for predicting the growth mechanism of oxide scales was successfully validated for the comparison of their different oxidation behaviors. Experimental results illustrated that interfacial boundaries existed in nanocrystalline Ni coatings were favorable for embedding CeO2 nanoparticles to make dispersion strengthening. The existence of well-distributed CeO2 phase in the coating was beneficial to achieve finer-grained size of Ni grains for improvements of structural densification. It exhibited super oxidation resistance of the Ni–CeO2 coatings as compared to that of pure nickel, which was mainly attributed to the Ce-rich oxide scales that acted as a passive layer to fully cover on the coating surface. Furthermore, the precipitation of the Ce-rich phase along high-angle grain boundaries would make great contributions to promote the bonding interactions with high-energy defective regions for effectively completing those cracking boundaries, thereby achieving denser microstructure attached with excellent thermodynamic stability of the Ni–CeO2 coatings. 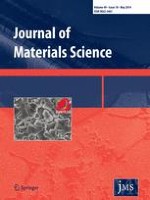 Fabrication of carbon papers using polyacrylonitrile fibers as a binder

Catalyst-free synthesis of silicon nanowires by oxidation and reduction process

Interactions between ferrite recrystallization and austenite formation in high-strength steels