Watershed models have been applied to develop management strategies for water resources, but its effectiveness is limited by predictive uncertainties associated with input data. In this study, we focus on the effect of uncertainty in spatial distribution of rainfall and DEM resolution on hydrology and non-point source pollution (H/NPSP) modeling of a large watershed. The uncertainty introduced by spatial distribution of rainfall was determined by the density of raingauge network, which were estimated by Thiessen polygon method. A range of 16 DEM spatial resolutions, from 30 to 480 m, was examined, and the annual and monthly model outputs based on each resolution were compared. The Hydrologic Simulation Program-FORTRAN (HSPF) was used to quantify the effect of input data uncertainty on watershed H/NPSP modeling of the Yixunhe watershed in China. Results indicated that the rainfall and DEM resolution could contribute significant uncertainty in model input information and the carry-magnify effect caused even larger uncertainty in the H/NPSP modeling. This uncertainty was magnified from hydrology modeling (stream flow) into NPSP modeling (TP, TN, NO3-N and NH3-N). From a practical point of view, it is indicated that every effort must be made to collect spatial data at high resolution to minimize uncertainty in model simulations. The results of this study provide useful information for better understanding and estimating uncertainties in the HSPF model. 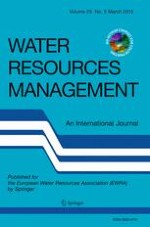