Continuous and heavy precipitation in the early September 2011 triggered several landslides in Xi’ an, Shaanxi province, China. A particularly relevant example is the Bailu tableland landslide occurrence on 17 September 17 2011, which was responsible for 32 casualties. This was selected as a case study for investigating the trigger factors, formation process, and hazard characteristics of the landslides of this type. The results showed that: (1) The Bailu landslide possessed a relative height = 90 m and width = 170 m, respectively, an average initiation thickness was 10 m, a sliding direction and distance of 55° and 150 m, respectively, a total volume of 15 × 104 m3, and an average deposit thickness of 12 m; (2)The main trigger factors were excessive slope cutting with a heavy and long duration of rainfall; (3) The landslide was a typical example of its type, based on the trigger factors since the formation process of the landslide is generally as follows: cutting leads to gravitational and stress field redistribution, initiating the appearance of cracks, which then enlarge after the continuous infiltration of rainwater. This results in the formation of additional cracks, and finally, slope failure; a nd (4) Based on our analyses of this landslide and previous events, we proposed equations to determine the critical precipitation threshold and the potential risk distance. This study provided an important reference for understanding and studying the mechanisms of this type of landslide, as well as guidelines for future disaster prevention and mitigation in this region. 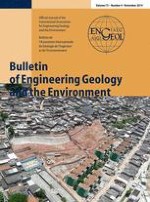 Modifications to the GSI for granite in drilling

Resistivity mapping as a tool for identification and characterisation of weakness zones in crystalline bedrock: definition and testing of an interpretational model

Analyzing the stability of a failing rock slope for suggesting suitable mitigation measure: a case study from the Theng rockslide, Sikkim Himalayas, India

Geological and geotechnical observations from the Niagara Tunnel Project