This paper presents a new analytical criterion for brittle failure of rocks and heavily over-consolidated soils. Griffith’s model of a randomly oriented defect under a biaxial stress state is used to keep the criterion simple. The Griffith’s criterion is improved because the maximum tensile strength is not evaluated at the boundary of the defect but at a certain distance from the boundary, known as half of the critical distance. This fracture criterion is known as the point method, and is part of the theory of critical distances, which is utilised in fracture mechanics. The proposed failure criterion has two parameters: the inherent tensile strength, σ 0, and the ratio of the half-length of the initial crack/flaw to the critical distance, a/L. These parameters are difficult to measure but they may be correlated with the uniaxial compressive and tensile strengths, σ c and σ t. The proposed criterion is able to reproduce the common range of strength ratios for rocks and heavily overconsolidated soils (σ c/σ t = 3–50) and the influence of several microstructural rock properties, such as texture and porosity. Good agreement with laboratory tests reported in the literature is found for tensile and low-confining stresses. 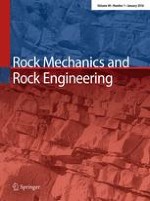 An Experimental Study of Cutting Performances of Worn Picks