Clustering is a well known methodology to optimize the use of the resources, to lower the congestion and to improve the reliability in self-organized networks as the wireless sensor networks. This paper deals with the proposal of a novel clustering approach based on a low complexity distributed cluster head election based on a two-stage process. In particular, a suitable objective function is introduced in order to take into account the number of 1-hop neighbours (i.e., node degree) and the residual node energy. It is shown in the paper that the proposed protocol achieves remarkable performance improvements with respect to different alternatives, especially in the case of unpredictable scenarios. Moreover, the proposed protocol exhibits self-organize capabilities that are of special interest for critical monitoring applications, in particular when the effect of nodes mobility is significant. 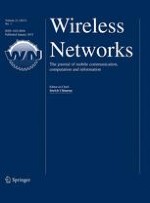 On the performance of heterogeneous MANETs

Boundary-free skeleton extraction and its evaluation in sensor networks