Cognitive radio is a technological concept pushing for the introduction of intelligent radio operation that goes beyond traditional system adaptation. So far, a rather limited amount of work has been published on the cognitive mechanisms that should be embedded into communicating equipments to achieve such an intelligent behavior. This paper presents a generic cognitive framework for autonomous decision making with regard to multiple, possibly conflicting, operational objectives in a time-varying environment. The framework is based on the definition of two scales introducing order relationships between the configurations that help the reasoning and learning processes. The resulting cognitive engine learns to progressively identify the optimal configurations for the design objectives imposed given the current radio environment. The proposed approach is illustrated for a case of cognitive waveform design and extensive simulation results validate the cognitive engine behavior. 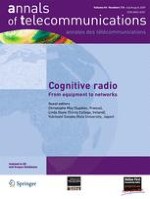 Foreword—cognitive radio: from equipment to networks