The Tibetan Plateau is a landslide-prone area in Southwest China. A large-scale ancient landslide named Luanshibao Landslide on the eastern margin of the Tibetan Plateau is described in this paper, based on field investigation and satellite image interpretation. The geological setting and morphometric properties of the landslide are presented. Especially, the hummocky landscape, a prominent feature in the deposit area, is described. The total run-out distance of this landslide is 3910 m and the maximum velocity is estimated to be 36.6 m/s. The angle of reach is analysed as the index expressing the mobility of the landslide. Its value is about 12 degrees, indicating the high landslide mobility. Field observation shows that this landslide was most likely triggered by an earthquake, and the seismic acceleration capable to induce this landslide is estimated to be 0.36 g. This landslide might have changed the course of the Litang River. 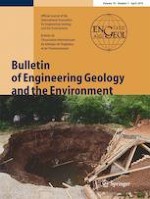