Most infiltration models survey infiltration in large scale regions using an assumption that the slope of the ground is equal to zero. The Modified Green and Ampt model is one of a few infiltration models that considers slope as an input parameter in its formulation. Here, using artificial neural networks in a raster-based design, basic research is presented regarding the effect of surface slope on infiltration. For the investigation, three catchments with different areas and slopes were selected as case studies, based on existing runoff stations in the upstream region of the Johor River Basin in southern Malaysia. In this research, the efficiency of six different functions was studied in order to determine the best performer for slope in the Modified Green and Ampt model. We also sought to find the most suitable ANN transfer function for infiltration calculations. By calculating runoff for each pixel, accumulation maps were used for corroborating the suitability of the obtained results. The results indicated that the Log-sigmoid was the most appropriate transfer function. We also determined that using the exponential form for the slope in the Modified Green and Ampt model formulation was more accurate, as compared to the original linear shape. 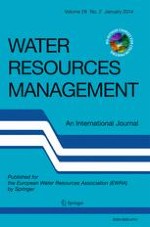 A Landscape Planning and Management Tool for Land and Water Resources Management: An Example Application in Northern Ethiopia