Hybrid evolutionary methods combine approaches extracted from different evolutionary computation techniques to build a single optimization method. The design of such systems represents a current trend in the evolutionary optimization literature. In hybrid algorithms, the objective is to extend the potential advantages of the integrated approaches and eliminate their main drawbacks. In this work, a hybrid method for solving optimization problems is presented. The proposed approach combines (A) the explorative characteristics of the invasive weed optimization method, (B) the probabilistic models of the estimation distribution algorithms and (C) the dispersion capacities of a mixed Gaussian–Cauchy distribution to produce its own search strategy. With these mechanisms, the proposed method conducts an optimization strategy over search areas that deserve a special interest according to a probabilistic model and the fitness value of the existent solutions. In the proposed method, each individual of the population generates new elements around its own location, dispersed according to the mixed distribution. The number of new elements depends on the relative fitness value of the individual regarding the complete population. After this process, a group of promising solutions are selected from the set compound by the (a) new elements and the (b) original individuals. Based on the selected solutions, a probabilistic model is built from which a certain number of members (c) are sampled. Then, all the individuals of the sets (a), (b) and (c) are joined in a single group and ranked in terms of their fitness values. Finally, the best elements of the group are selected to replace the original population. This process is repeated until a termination criterion has been reached. To test the performance of our method, several comparisons to other well-known metaheuristic methods have been made. The comparison consists of analyzing the optimization results over different standard benchmark functions within a statistical framework. Conclusions based on the comparisons exhibit the accuracy, efficiency and robustness of the proposed approach. 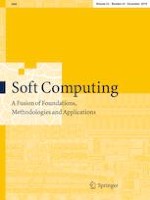 The low-rank decomposition of correlation-enhanced superpixels for video segmentation