For pin-jointed assemblies with many members or self-stress states, the form-finding problem using conventional methods generally involves considerable computational complexities due to the large size of the solution spaces. Here, we propose an improved form-finding method for prestressable pin-jointed structures by combining symmetry-based qualitative analysis with particle swarm optimization. Expressed in the symmetry-adapted coordinate system, the nodal coordinate vectors of a structure with specific symmetry and topology are independently extracted from the key blocks of the small-sized force density matrices associated with rigid-body translations. Then, the first block of the equilibrium matrix is computed, in which the null space reveals integral self-stress states. Particle swarm optimization is introduced and adapted to find feasible prestress modes, where the uniformity and unilaterality conditions of the members are considered. Besides, the QR decomposition with column pivoting is adopted for efficient computations on the null space of these blocks. The QR decompositions of the small-sized blocks of the force density matrix and the equilibrium matrix are performed iteratively, to simultaneously find a stable self-equilibrium configuration and a feasible prestress mode. Representative examples show the presented method is computationally efficient and accurate for the form-finding of symmetric tensegrities and prestressed cable–strut structures. 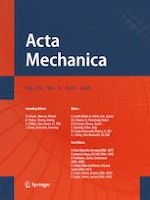 Uniformity of stresses inside a parabolic inhomogeneity in finite plane elastostatics