The mechanical properties of composite structures are sensitive to the choice of the material systems, the distribution of laminates on the structure, and the sizing at the laminate level. This sensitivity depends on many variables. To overcome the difficulties in attaining a global solution for the optimisation problem of composite structures, a new strategy is proposed based on the hybridisation of the memetic algorithm (MA) and the selfish gene (SG) algorithm. Instead of a local search, as performed in MAs, the selfish gene (SG) theory is applied, which follows a different learning scheme in which the conventional population of the individuals is replaced by a virtual population of alleles. The proposed approach, which is called the memetic-based selfish gene algorithm (MA + SG), is a mixed model that applies multiple learning procedures to explore the synergy of different cultural transmission rules in the evolutionary process. The principal aspects of the approach are as follows: co-evolution of multiple populations, species conservation, migration rules, self-adaptive multiple crossovers, local search in hybrid crossover with local genetic improvements, controlled mutation, individual age control, and feature-based allele statistical analysis. To discuss the capabilities of the proposed approach, numerical examples are represented to compare the results of MA + SG with those obtained using genetic algorithms (GA) and MA. The numerical results of the comparison tests showed that the GA and the MA maintained long periods without the evolution of the best-fitted individual/solutions. This behaviour during evolution is associated with the slow maturation of the elite group of populations in the GA and MA approaches. This behaviour is avoided when the MA + SG proposed approach is used with computational cost benefits. 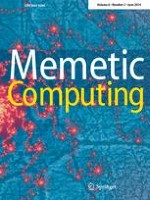