The aim of this paper is to study a one-dimensional model system of equations for ionized gas dynamics at high temperature where the gas is a mixture of two kinds of monatomic gas. In addition to the mass density, pressure, temperature and particle velocity, degrees of ionization of both gases are also involved. The equations of motion are derived from conservation of mass, momentum and energy, which are supplemented by the first and second law of thermodynamics, thermodynamic equations and Saha’s ionization equations by assuming that the local thermal equilibrium is attained. The equations constitute a strictly hyperbolic system, which guarantees that the initial value problem is well-posed locally in time for sufficiently smooth initial data. However the geometric properties of the system are rather complicated: In particular, we prove the existence of a region where convexity (genuine nonlinearity) fails for forward and backward characteristic fields. Also we study thermodynamic properties of shock waves by detailed analyses of the Hugoniot locus, which are used in a mathematical study of existence and uniqueness of solutions to the shock tube problem. 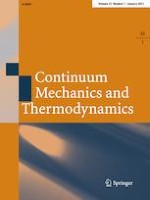 Variational regularization of damage models based on the emulated RVE

Analysis of the minimal model for the enthalpy relaxation and recovery in glass transition: application to constant-rate differential scanning calorimetry