In this two-part paper we begin the development of a new class of methods for modeling fluid–structure interaction (FSI) phenomena for air blast. We aim to develop accurate, robust, and practical computational methodology, which is capable of modeling the dynamics of air blast coupled with the structure response, where the latter involves large, inelastic deformations and disintegration into fragments. An immersed approach is adopted, which leads to an a-priori monolithic FSI formulation with intrinsic contact detection between solid objects, and without formal restrictions on the solid motions. In Part I of this paper, the core air-blast FSI methodology suitable for a variety of discretizations is presented and tested using standard finite elements. Part II of this paper focuses on a particular instantiation of the proposed framework, which couples isogeometric analysis (IGA) based on non-uniform rational B-splines and a reproducing-kernel particle method (RKPM), which is a meshfree technique. The combination of IGA and RKPM is felt to be particularly attractive for the problem class of interest due to the higher-order accuracy and smoothness of both discretizations, and relative simplicity of RKPM in handling fragmentation scenarios. A collection of mostly 2D numerical examples is presented in each of the parts to illustrate the good performance of the proposed air-blast FSI framework. 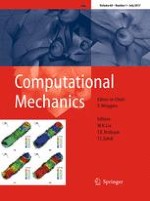