A fundamental question in computational nonlinear partial differential equations is raised to discover if one could construct a functional iterative algorithm for the regularized long-wave (RLW) equation (or the Benjamin–Bona–Mahony equation) based on an integral equation formalism? Here, the RLW equation is a third-order nonlinear partial differential equation, describing physically nonlinear dispersive waves in shallow water. For the question, the concept of pseudo-parameter, suggested by Jang (Commun Nonlinear Sci Numer Simul 43:118–138, 2017), is introduced and incorporated into the RLW equation. Thereby, dual nonlinear integral equations of second kind involving the parameter are formulated. The application of the fixed point theorem to the integral equations results in a new (semi-analytic and derivative-free) functional iteration algorithm (as required). The new algorithm allows the exploration of new regimes of pseudo-parameters, so that it can be valid for a much wider range (in the complex plane) of pseudo-parameter values than that of Jang (2017). Being fairly simple (or straightforward), the iteration algorithm is found to be not only stable but accurate. Specifically, a numerical experiment on a solitary wave is performed on the convergence and accuracy of the iteration for various complex values of the pseudo-parameters, further providing the regions of convergence subject to some constraints in the complex plane. Moreover, the algorithm yields a particularly relevant physical investigation of the nonlinear behavior near the front of a slowly varying wave train, in which, indeed, interesting nonlinear wave features are demonstrated. As a consequence, the preceding question may be answered. 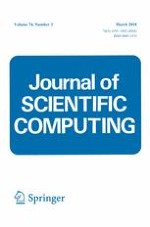