The understanding of fractures in hard rock is important for topics such as geomechanics, rock mechanics and groundwater flow and solute transport. One key aspect is the roughness of the fracture, often described as the joint roughness coefficient, JRC. JRC is often subjectively interpreted by one geologist comparing a fracture trace with different type traces. It has been shown that several geologists are needed to get reliable interpretations of JRC. There are numerous attempts in the literature to develop objective methods to estimate JRC from digital traces. Some methods are not applicable to fractures, which give arbitrary results while other methods are sensitive to the resolution of the digitalisation and hence need a new relationship for each resolution. Another way of describing the roughness is by the two parameters fractal dimension and magnitude distribution of the asperities. These parameters can be objectively inferred using algorithms and act as input for a model to estimate JRC. Using several evaluation methods, the uncertainty can be decreased and, hence, more robust results achieved. A multilinear model is developed, JRC = − 4.3 + 54.6σδh(1mm)  + 4.3H, that estimates JRC, of the classic ten type curves by Barton and Choubey, with standard deviation ± 1 unit. Despite the simplicity of the model it explains 96.5% of the variance in JRC. The developed model is benchmarked against an ensemble of geologists, using nine synthetic fracture traces. The median difference of JRC is 0.2 units and the model shows 40% smaller spread compared to the geologists. 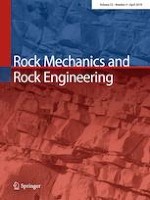 Effect of Fracturing Fluid/Shale Rock Interaction on the Rock Physical and Mechanical Properties, the Proppant Embedment Depth and the Fracture Conductivity