Pillar burst is one type of rockburst that occurs in underground mines. Simulating the stress change and obtaining insight into the pillar burst phenomenon under laboratory conditions are essential for studying the rock behavior during pillar burst in situ. To study the failure mechanism, a novel experimental technique was proposed and a series of tests were conducted on some granite specimens using a true-triaxial strainburst test system. Acoustic emission (AE) sensors were used to monitor the rock fracturing process. The damage evolution process was investigated using techniques such as macro and micro fracture characteristics observation, AE energy evolution, and b value analysis and fractal dimension analysis of cracks on fragments. The obtained results indicate that stepped loading and unloading simulated the pillar burst phenomenon well. Four deformation stages are divided as initial stress state, unloading step I, unloading step II, and final burst. It is observed that AE energy has a sharp increase at the initial stress state, accumulates slowly at unloading steps I and II, and increases dramatically at peak stress. Meanwhile, the mean b values fluctuate around 3.50 for the first three deformation stages and then decrease to 2.86 at the final stage, indicating the generation of a large amount of macro fractures. Before the test, the fractal dimension values are discrete and mainly vary between 1.10 and 1.25, whereas after failure the values concentrate around 1.25–1.35. 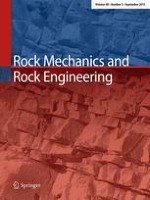