The objective of this work is to present a novel multi-attribute decision making (MADM) method under interval-valued intuitionistic fuzzy (IVIF) set environment by integrating a Technique for Order Preference by Similarity to Ideal Solution (TOPSIS) method. Set pair analysis (SPA) theory is the modern uncertainty theory which is composed by the three components, namely “identity”, “discrepancy” and “contrary” degrees of the connection number (CN) and overlap with the various existing theories for handling the uncertainties in the data. Thus, motivated by this, in the present work, an attempt is made to enrich the theory of information measure by presented some exponential based distance measures using CNs of the IVIF sets. The supremacy of the proposed measure is also discussed. Afterward, a TOPSIS method based on the proposed distance measures is developed to solve MADM problem under IVIF environment where each of the element is characteristics by IVIF numbers. The utility, as well as supremacy of the approach, is confirmed through a real-life numerical example and validate it by comparing their results with the several existing approaches results. 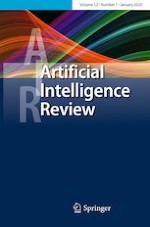 Real-world diffusion dynamics based on point process approaches: a review

A review on intelligent process for smart home applications based on IoT: coherent taxonomy, motivation, open challenges, and recommendations