Under the framework of evolutionary paradigms, many evolutionary algorithms have been designed for handling multi-objective optimization problems. Each of the different algorithms may display exceptionally good performance in certain optimization problems, but none of them can be completely superior over one another. As such, different evolutionary algorithms are being synthesized to complement each other in view of their strengths and the limitations inherent in them. In this study, the novel memetic algorithm known as the Opposition-based Self-adaptive Hybridized Differential Evolution algorithm (OSADE) is being comprehensively investigated through a comparative study with some state-of-the-art algorithms, such as NSGA-II, non-dominated sorting Differential Evolution (NSDE), MOEA/D-SBX, MOEA/D-DE and the Multi-objective Evolutionary Gradient Search (MO-EGS) by using a suite of different benchmark problems. Through the experimental results that are presented by employing the Inverted Generational Distance (IGD) and the Hausdorff Distance performance indicators, it is seen that OSADE is able to achieve competitive, if not better, performance when compared to the other algorithms in this study. 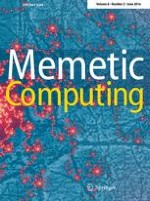