High-Speed Orthogonal-Frequency-Division-Multiplexing (HS-OFDM) is an OFDM system with high OFDM symbol rate. In HS-OFDM system, the symbol period is comparable with the multipath delay-spread of the channel. No cyclic-prefix is used with HS-OFDM to increase the bandwidth efficiency. HS-OFDM suffers from Inter-Symbol Interference (ISI) and Inter-Carrier Interference (ICI) signals. In this paper, a complete mathematical model of the received HS-OFDM signal with both ISI and ICI interfering signals are represented. A novel receiver that tracks the time-varying channel gain and reduces the effects of the interfering signals, is proposed based on the deduced mathematical model. The new receiver depends on a new arrangement of decision-feedback equalizer, which is designed in frequency domain. The paper illustrates how the taps of the equalizer are calculated, and it calculates the remaining amount of interference after the use of the proposed receiver. The used model of the wireless channel in HS-OFDM system is the frequency-selective channel. It models the outdoor channel in HS-OFDM system. 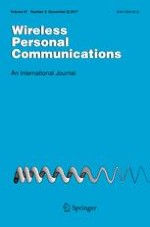 A Novel Threshold Cryptography with Membership Authentication and Key Establishment