Nanofluidic chips are becoming increasingly important for biological and chemical applications due to the special phenomena only occur in nanochannels. In this study, a simple and low-cost method for fabricating SU-8 nanofluidic chips is proposed based on traditional ultraviolet (UV) photolithography. The thermal-induced cracks (nanochannels) can be automatically formed by thermal stress release during the postbake process. The influence of pattern-shape, pattern-angle and pattern-distance on the maximum stress of the SU-8 patterns was investigated. And the effect of postbake temperature on the maximum stress of the SU-8 patterns was also analyzed. The numerical and experimental results show that when the triangle SU-8 patterns with pattern-angle of 60° is postbaked at 125 °C, the nanocracks can be easily formed between two patterns. With this newly developed technology, simple, low-cost and large scale nanofluidic chips can be fabricated only by traditional UV photolighography, which allows a commercially manufacturing of nano-components. 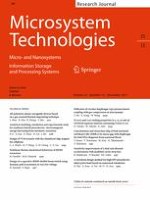