Flow over two fish (modeled by two flexible plates) in tandem arrangement is investigated by solving the incompressible Navier–Stokes equations numerically with the DSD/SST method to understand the differences between the geometrically linear and nonlinear models. In the simulation, the motions of the plates are reconstructed from a vertically flowing soap film tunnel experiment with linear and nonlinear kinematic models. Based on the simulations, the drag, lift, power consumption, vorticity and pressure fields are discussed in detail. It is found that the linear and nonlinear models are able to reasonably predict the forces and power consumption of a single plate in flow. Moreover, if multiple plates are considered, these two models yield totally different results, which implies that the nonlinear model should be used. The results presented in this work provide a guideline for future studies in fish swimming.

Titel
A numerical study of linear and nonlinear kinematic models in fish swimming with the DSD/SST method
Autor:
Fang-Bao Tian 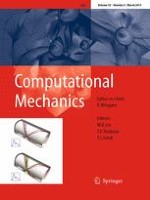