A preliminary study on the offshore stratigraphy in Hong Kong and its hydrogeological implications | springerprofessional.de Skip to main content
TOOLBAR 1 2 3 4
SUCHE MENÜ 1 2 3 4

Offshore groundwater reserves, commonly sequestered in relict fluvial systems, have been reported globally. In Hong Kong, submarine terrestrial sediments are the evidence of local fluvial systems during glacial periods and they probably sequester relatively fresh water. This study aims to locate these sand deposits. An offshore vibrocore in the southwestern waters of Hong Kong was analysed for its geophysical and elemental properties in order to deduce the palaeoenvironment. Also, marine seismic profiling was adopted at two selected sites to depict the distribution of sand and gravel deposits and to estimate the average thickness of these aquifer materials. A four-unit sequence was noted with increasing marine influence since 8 ka BP. This agrees with the hypothesis that the offshore groundwater reserves are the relics of flow systems during glacial periods. The extensive sand deposits in the study areas are often shielded by sufficiently thick marine clay against vertical salinisation, allowing fresh groundwater to be preserved. The average thickness of these aquifer materials is about 11 m at the study sites. If these sand deposits are recharged through onshore outcrops, the reserves may be a sustainable water resource. 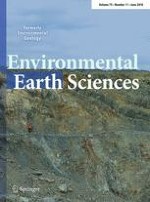 Erratum to: Vegetation dynamics in relation with climate over Nigeria from 1982 to 2011

Proposals for risk assessment of major cations in surface water and deep sediment: iso-cation curves, probabilities of occurrence and non-occurrence of cations

Sources, distributions of fluoride in waters and its influencing factors from an endemic fluorosis region in central Guizhou, China