Coal is the primary source of energy in India. Coal ash obtained after coal combustion is considered a waste and dumped near the plant. Storage of coal ash close to thermal and other plants has now become a serious problem and creates environmental pollution. Coal ash contains an appreciable amount of unburned carbon, which can be recovered and reused as a source of energy; whereas the carbon-free ash can be utilized in cement, refractory, and fertilizer industries. Thus, there is a need to apply an effective separation technology to recover unburned carbon from coal ashes. In this study, a froth flotation technique was used to recover unburned carbon from a boiler bottom slag. The effect of particle size, conditioning time, and collector combination was studied to achieve maximum selectivity. The optimum liberation size of bottom slag was found to be around 150 µm (100 mesh size) with a conditioning time of 2 min. Furthermore, it was observed that a collector with a 1:1 proportion of kerosene and fuel oil with methyl isobutyl carbinol as the frother provides significant results. The carbon content in the concentrate was increased from 17% (7283.3 kJ/kg) in the feed to 40% (17990.6 kJ/kg) in the final concentrate and can be recycled as fuel, whereas the tailing fraction with carbon content less than 6% can be used in cement, concrete, and refractory industries. 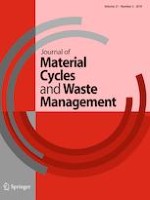 Use of copper mine tailing in concrete: strength characteristics and durability performance