In sublevel caving (SLC), the caving of the hangingwall due to ore extraction emphasises placement of the mining infrastructure in the footwall. While the footwall in general is less affected by ground settlement compared to the hangingwall, the changes in stress field from mining are significant. The footwall infrastructure must thus be positioned sufficiently far into the footwall to avoid damage from the mining-induced stress; however, placing the infrastructure farther into the footwall increases costs associated with additional drifting and operational distances. This paper presents a case study in which a robust prognosis tool for predicting infrastructure damage associated with SLC mining is developed. The concept of the proposed methodology was developed for the Luossavaara-Kiirunavaara Aktiebolag Kiirunavaara SLC mine. Initial steps are data collection through systematic damage mapping followed by conceptual modelling of the general rock mass response to mining. The results of the conceptual models are used as the basis for refined calibrated models detailing the damage development and failure mechanisms. The main system behaviour, failure mechanism and associated damage evolution are incorporated into a bilinear equation using the studied depth and local ore width as input to estimate the final horizontal damage extent from the footwall contact after mining of any specific level. The proposed relationship accurately replicates the current damage pattern within 40 m for more than 70% of the recorded observations up until current mining. The anticipated future damage extent is also shown to be well correlated with current micro-seismic event locations. The connection between seismic rock mass damage and subsequent infrastructure damage during de-confinement suggests that current seismic records from operations, which currently experience no stability issues, might become important at later mining stages. 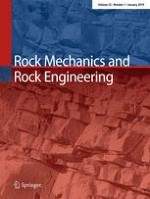 DEM Simulation of the Evolution of an Unstable Rock Face: A Modelling Procedure for Back Analysis of Rockslides