UWASN (underwater acoustic sensor network) is a special kind of WSN (wireless sensor network), which is consisted of underwater acoustic sensor nodes. The UWASN can be deployed for real-time warship monitoring, oceanographic data collection, environmental monitoring, and disaster prevention, etc. Hence, lots of researches have been done on it [ 1- 3].
The design of a reliable data transfer protocol for UWASN is challenging due to the specific characteristics of acoustic channels: high bit error rates, high energy consumption, limited available bandwidth, low transmission speed, and long unstable packet delivery delay.
Anzeige
Traditionally, the data transmission reliability is guaranteed by acknowledgments and/or FEC (forward error correction). However, the data transmission protocols based on traditional acknowledgments, for example, ARQ, are not suitable for UWASN [ 4- 6] because their acknowledgment packets not only prolong the transmission delay but also waste lots of limited bandwidth. Therefore, to reduce the bandwidth waste and transmission delay, caused by acknowledgment packets, without reducing data transmission reliability, some improved ARQ-based protocols [ 6- 9] use data packets as implicit acknowledgments; some protocols [ 10- 14], such as segmented data reliable transport (SDRT) [ 12, 13], NCRF (network coding [ 14] in rateless fashion) [ 15], and NCIA (network coding with implicit acknowledgment) [ 15], send coded packets in burst, which only needs a acknowledgment packet; some protocols, such as ADELIN (adaptive reliable transport) [ 16, 17], VBF-NC (vector-based forwarding-network coding) [ 18] and MPNC (multiple path and network coding) [ 19], guarantee transmission reliability only by sending enough coed packets.
In MPNC, three disjoint paths are established firstly, and then two groups of packets ( A and B), coded by network coding, are transmitted over the two side paths individually; another group of coded packets ( C =  A ⊕ B) are transmitted over the middle path (Figure  1). So, any two paths can work together as a redundant path for another path. That is, the reliable transmission of one packet can be guaranteed by 1.5 packets in MPNC.
×
In order to reduce data transmission overhead, the packets of group C are coded further at special ratio by network coding as shareable redundant packet according to the link error, and TPNC (twin path and network coding) is proposed in this paper. In TPNC, two disjoint paths are established firstly, and then, one group of packets A( B), coded by network coding, are transmitted with its respective shareable redundant packets on one path.
The rest of the paper is arranged as the following: firstly, TPNC is proposed in chapter 2; secondly, the performances of TPNC are analyzed in chapter 3; finally, a conclusion is drawn in chapter 4.
Anzeige

On the basis of analyzing the existed reliable data transfer protocols for UWASN, TPNC is proposed to improve MPNC in this paper. In order to reduce the number of redundant packets, which belong to the group C in MPNC, without affecting the transmission reliability, the packets of the group C are coded further by network coding as shareable redundant packet according to the link error. And then, two groups of packets ( A and B), coded by network coding, are transmitted with their respective shareable redundant packets over the two established disjoint paths to transfer the data packet reliably. The simulation results show that the redundant packet number of TPNC is reduced greatly without affecting the strength of TPNC protocol. So, compared with MPNC, TPNC can acquire similar data delivery ratio with lower energy consumption.

The paper is supported by National Science foundation of China (41176082, 61073082), supported by Program for New Century Excellent Talents in University (NCET-13-0753), Specialized Research Fund for the Doctoral Program of Higher Education of China (20132304110031), National Science foundation of Heilongjiang Province, China (42400621-1-14076), and Specialized Research Fund for the Innovation talents of science and technology (2014RFQXJ012).
Open AccessThis article is distributed under the terms of the Creative Commons Attribution 4.0 International License ( https://​creativecommons.​org/​licenses/​by/​4.​0), which permits use, duplication, adaptation, distribution, and reproduction in any medium or format, as long as you give appropriate credit to the original author(s) and the source, provide a link to the Creative Commons license, and indicate if changes were made. 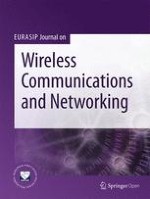