Using Hunt and Morgan’s (Journal of Marketing, 59, 1–15, 1995, Journal of Marketing, 60(4), 107–114, 1996) Resource-Advantage Theory, this study examined the relationship between firm resources (e.g. financial, physical, human, organisational, informational, and relational resources) and levels of performance in small, independent retailers; and whether performance was moderated by retailers’ perception of the level of environmental hostility, as well as by their entrepreneurial orientation. Surveys were mailed to small, independent retailers throughout Tasmania, Australia. It was expected that retailers’ use of resources would predict performance. Expectations were partially supported; responses (N = 384) showed that the resources related to performance were access to financial capital, and human and organisational resources. Environmental hostility and entrepreneurial orientation did not moderate this relationship. However, the impact of entrepreneurial orientation on performance was moderated by environmental hostility. 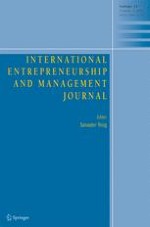 The relationship among entrepreneurial activity, business cycles and economic openness