Use of the geological strength index (GSI) rock mass classification system and the associated m, s and a parameter relationships linking GSI with the Hoek–Brown failure criterion provides a demonstrated, effective and reliable approach for prediction of rock mass strength for surface and underground excavation design and for rock support selection for most “normal” rock masses. One of the key advantages of the index is that it allows characterization of rock masses difficult to describe, such as flysch, and the geological reasoning it embodies, allowing adjustments to be made to its ratings to cover a wide range of rock masses and conditions compared to a typical engineering approach. Flysch, having high heterogeneity in its petrographic nature and a tectonically disturbed structure, forms very weak rock masses in many cases and needs a particular geotechnical classification according to the engineering geological characteristics it presents. After a decade of application of the GSI for the classification of heterogeneous rock masses (Marinos and Hoek 2001), this paper attempts to re-evaluate or verify the original values and to contribute to the appropriate selection of the index for various conditions. A revised GSI diagram for heterogeneous rock masses, such as flysch, is presented, where a certain range of GSI values for every rock mass type is proposed according to the siltstone-sandstone participation and their tectonic disturbance. Data from the design and construction of a large number of tunnels in a variety of geological conditions were assessed for this purpose. In addition to the GSI values, the selection of the appropriate “intact” rock properties for this type of heterogeneous rock mass is also discussed, where characteristic σci, Ei and modulus ratio (MR) values are proposed. 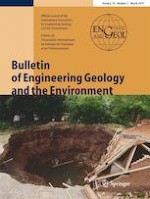 Characteristics of aggregates used in road construction in Portugal, complying with the requirements of European Conformity (CE marking)

Implications of increasing the ferruginous cement on the physical and mechanical properties of the Cambro-Ordovician Wajid Sandstone in southwest Saudi Arabia: applications for construction purposes

The impact of active faulting on the geotechnical properties of the Upper Gotvand Dam, southwest Iran