In this research a human detection system is proposed in which people are viewed from an overhead camera with a wide angle lens. Due to perspective change a person can have different orientations and sizes at different positions in the scene relative to the optical centre. We exploit this property of the overhead camera and develop a novel algorithm which uses the variable size bounding boxes with different orientations, with respect to the radial distance of the center of the image. In these overhead view images we neither used any assumption about the pose or the visibility of a person nor imposed any restriction about the environment. When compare the results of proposed algorithm with a standard histogram of oriented gradient (HOG) algorithm, we achieve not only a huge gain in overall detection rate but also a significant improvement in reducing spurious detections per image. On average, 9 false detections occur per image. A new algorithm is proposed where transforming the image patch containing a person to remove positional dependency and then applying the HOG algorithm eliminates 98% of the spurious detections in noisy images from an industrial assembly line and detects people with a 95% efficiency. 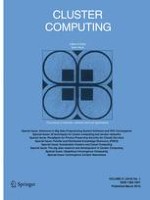 Clustering based on words distances