User authentication is one of the most important security services required for the resource-constrained wireless sensor networks (WSNs). In user authentication, for critical applications of WSNs, a legitimate user is allowed to query and collect the real-time data at any time from a sensor node of the network as and when he/she demands for it. In order to get the real-time information from the nodes, the user needs to be first authenticated by the nodes as well as the gateway node (GWN) of WSN so that illegal access to nodes do not happen in the network. Recently, Jiang et al. proposed an efficient two-factor user authentication scheme with unlinkability property in WSNs Jiang (2014). In this paper, we analyze Jiang et al.’s scheme. Unfortunately, we point out that Jiang et al.’s scheme has still several drawbacks such as (1) it fails to protect privileged insider attack, (2) inefficient registration phase for the sensor nodes, (3) it fails to provide proper authentication in login and authentication phase, (4) it fails to update properly the new changed password of a user in the password update phase, (5) it lacks of supporting dynamic sensor node addition after initial deployment of nodes in the network, and (6) it lacks the formal security verification. In order to withstand these pitfalls found in Jiang et al.’s scheme, we aim to propose a three-factor user authentication scheme for WSNs. Our scheme preserves the original merits of Jiang et al.’s scheme. Our scheme is efficient as compared to Jiang et al.’s scheme and other schemes. Furthermore, our scheme provides better security features and higher security level than other schemes. In addition, we simulate our scheme for the formal security analysis using the widely-accepted AVISPA (Automated Validation of Internet Security Protocols and Applications) tool. The simulation results clearly demonstrate that our scheme is also secure. 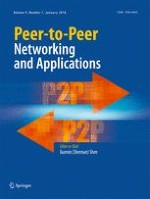 NetSecCC: A scalable and fault-tolerant architecture for cloud computing security