We investigated the gelation process of 12-hydroxystearic acid (12-HSA)/dodecane gel (turbid gel), 12-HSA/xylene and 12-HSA/toluene gels (transparent gels) by using time-resolved synchrotron small-angle X-ray scattering technique. The fibers were developed via nucleation and growth mechanism, and the induction period was longer at higher temperatures. After the induction period, the fiber growth can be divided into two regimes. In the first stage, the scattering intensity increased with time without appearance of any crystalline peak, and in the second stage (001) peak appeared due to crystalline nucleation. In the former regime, the fibers grew with increasing the cross-sectional size, while in the latter regime, they grew with keeping it almost constant, i.e., with keeping the fiber thickness constant. The fiber thickness for the turbid gel (radius of the gyration R c of ∼100 Å) was thicker than that for the transparent gel (R c of ∼82 Å). The fractal dimensions of the fibrillar aggregates for the turbid gels (2.0–2.3) at various temperatures were larger than those for the transparent gels (1.4–1.6), suggesting that the structure of the former gels is more branching or more compact in comparison with the latter. 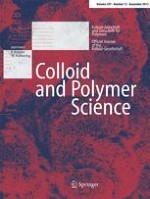