Mono-aluminium phosphate [MAP, Al(H2PO4)3] is a widely used chemical binder in the refractory industries due to its higher water solubility and greater bonding strength at low temperatures as it reacts with both basic and amphoteric oxides and has higher application temperature. In the present work, commercial-grade MAP is used in high-alumina castables, with different particle size distributions, as the sole binder. The effect of addition of 1 mass-% MgO as a setting accelerator to the castable compositions is also studied. Castables are processed as per conventional processing methods and heat treated after drying at 1000 and 1600 °C. Dried and fired compositions were evaluated for density and strength. Also micro-structural study of the 1600 °C sintered samples was carried out. Addition of MgO resulted in a marginal decrease in density values which may be due to a greater amount of hydrated phase formation and their decomposition at higher temperatures; but it significantly increased crushing strength for all the heat treatment temperatures. Greater bonding from faster reaction at low temperature and the formation of a liquid phase at higher temperatures are the reasons for such an enhancement. 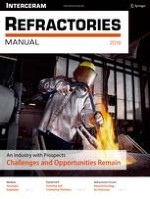 Nanotechnology in Refractory Castables — An Overview