The non-conforming immersed finite element method (IFEM) developed in Li et al. (Numer Math 96:61–98, 2003) for interface problems is extensively studied in this paper. The non-conforming IFEM is very much like the standard finite element method but with modified basis functions that enforce the natural jump conditions on interface elements. While the non-conforming IFEM is simple and has reasonable accuracy, it is not fully second order accurate due to the discontinuities of the modified basis functions. While the conforming IFEM also developed in Li et al. (Numer Math 96:61–98, 2003) is fully second order accurate, the implementation is more complicated. A new symmetric and consistent IFEM has been developed in this paper. The new method maintains the advantages of the non-conforming IFEM by using the same basis functions but it is symmetric, consistent, and more important, it is second order accurate. The idea is to add some correction terms to the weak form to take into account of the discontinuities in the basis functions. Optimal error estimates are derived for the new symmetric and consistent IFE method in the \(L^2\) and \(H^1\) norms. Numerical examples presented in this paper confirm the theoretical analysis and show that the new developed IFE method has \(O(h^2)\) convergence in the \(L^\infty \) norm as well. 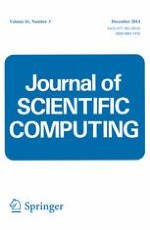 A Stabilized Nitsche Fictitious Domain Method for the Stokes Problem