The aim of this study was to develop a systematic method to analyze the rock failure mechanism under stress unloading conditions. In this method, three types of basic tests (Brazilian splitting, direct shear, and three-point bending) were used to extract acoustic emission (AE), dissipative energy, and fracture parameters to analyze the failure mechanism under stress unloading. The key parameters are as follows: the critical slope in rise time/amplitude—average frequency (RA-AF) coordinate system; the dissipation energy (us and ut) of unit shear and tensile cracks; relative roughness (δ) of fracture—variation coefficient of gray value of digital image for fracture. Additionally, the effectiveness of this method was illustrated by a rock burst experiment. The results show that most (92.3%) of the fragments during rock burst were produced by tension, while the energy consumed by shear cracks is ~ 1.03 times of tensile cracks. Moreover, the density of AE events is negatively correlated with the amount of released energy. Furthermore, the tensile microcracks concentrated as a splitting zone after yielding but before burst. However, in the burst stage, the shear microcracks breakthrough to form a shear zone, while the elastic strain energy released was partially transformed into kinetic energy to form the ejection zone. In addition, for the dissipation energy, the energy consumptions by shear, tension, and plastic deformation account for 62.5%, 25.2%, and 12.3%, respectively. 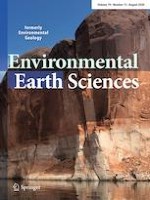 Correction to: Chronological evolution of the channel functional units in association with palaeo-hydrogeomorphological environment in the ancient delta fan of Subarnarekha basin, India

Assessment of the coastal vulnerability to sea level rise: Sultanate of Oman