Different polymer processing techniques, like thermoforming, cast film, or spinning, involve deformation of the material in a rubber-like state. In the case of semi-crystalline materials the processing temperature can be near but lower than the melting point. Moreover, in these processes, elongational strains are generally very high which lead to important crystalline evolution and orientation. Concomitantly, the thermomechanical behavior of the film is linked to the morphological evolving and the crystalline orientation due to the strain. In the present work, the elongational behavior was studied for a polypropylene film at temperatures between 110 and 140 °C and constant elongation rates. Based on a two-phase approach (amorphous and crystalline), a thermomechanical modeling of the stress curves is proposed including the fragmentation and the fibrils formation mechanisms. Particularly, the originality of the model consists in taking into account the fibrils contribution to the stress only as far as they are generated. As a consequence the model takes an integral form. However, despite the simplicity of this approach, the stress curves are described relatively well.

Titel
A thermomechanical modeling approach of the structural changes in semi-crystalline polymers under elongational strain
Autoren:
A. Thévenon
R. Fulchiron 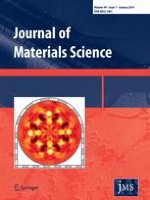 Sonoelectrochemical synthesis of a nanoscale complex of lead(II) and 2-methyl-8-hydroxyquinoline: spectroscopic, photoluminescence, thermal analysis studies and its application in an OLED

Polyolefin-based nanocomposites: the effect of organosilane on organoclay dispersion