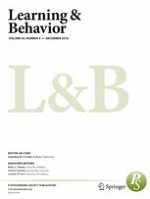 The oddity preference effect and the concept of difference in pigeons

Adolescent rats fail to demonstrate a LiCl-induced pre-exposure effect: Implications for the balance of drug reward and aversion in adolescence

Erratum to: Renewal of extinguished instrumental responses: independence from Pavlovian processes and dependence on outcome value