The nonlinear dynamic equations of vibrations of a von Kármán thin rectangular elastic plate are solved by means of a time spectral method. External constant (compressive or stretching) forces, applied to the edges of the plate, cause oscillations of the plate. Once the initial and boundary conditions for the equations are set up, the initial-boundary value problem has a unique solution. The solution is expanded in double trigonometric series with time-dependent coefficients. Galerkin’s projections are applied for spatial discretization. The Fourier coefficients are estimated, and the rate of convergence of the method is obtained. The resulting system of nonlinear ordinary differential equations is solved by a numerical scheme based on the fourth-order Runge–Kutta method. The implicit Newmark-\(\beta \) method is also tested. Numerical examples with various initial conditions are presented. 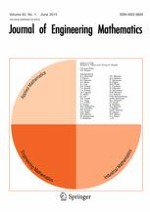