In this paper, a Timoshenko dielectric beam model with the consideration of the direct flexoelectric effect is developed by using the variational principle. The governing equations and the corresponding boundary conditions are naturally derived from the variational principle. The effect of flexoelectricity on the Timoshenko dielectric beams is analytically investigated. The developed beam model recovers to the classical Timoshenko beam model when the flexoelectricity is not taken into account. To illustrate this model, the deflection and rotation of Timoshenko dielectric nanobeam under two different boundary conditions are calculated. The numerical results reveal that both the deflection and rotation predicted by the current model are smaller than those predicted by the classical Timoshenko beam model. Moreover, the discrepancies of the deflection and rotation between the values predicted by the two models are very large when the beam thickness is small. The current model can also reduce to the Bernoulli–Euler dielectric beam model wherein the shear deflection is not considered. This work may be helpful in understanding the electromechanical response at nanoscale and designing dielectric devices. 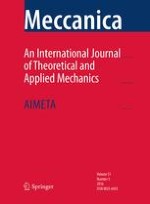 Regular and chaotic vibration in a piezoelectric energy harvester