3 Complementary results on superhedging and arbitrage

The preceding results show that quasi-sure and pathwise superhedging are essentially equivalent. As \(\mathfrak{P}\)-q.s. superhedging strategies might be difficult to compute and implement in practice, it might be preferable to work on a prediction set \(\Omega \) using pathwise arguments. Given that determining \(\Omega ^{*}\) is computationally expensive as well, the quantity of interest is then the superhedging price on \(\Omega \) and not on \(\Omega ^{*}\) seen in the duality results in Sect.  2.3. Thus, we should like to find sufficient conditions under which the superhedging strategy associated with \(\pi _{\Omega ^{*}_{\Phi }}(g)\) can be extended to \(\Omega \) without any additional cost. The intuition is that as \(\Omega \setminus \Omega ^{*}\) describes non-efficient beliefs, we should be able to superhedge \(g\) on this set by implementing an arbitrage strategy. It turns out that this intuition is not true in general. Indeed, we run into problems regarding measurability of these arbitrage strategies, which means that this procedure only works in special cases.
To simplify the analysis, throughout this section only, we assume that \(\Phi =0\) and \(\omega \mapsto S_{t}(\omega )\) is continuous. The latter is satisfied e.g. when \(\omega \mapsto S_{t}(\omega )\) is the coordinate mapping, i.e., \(S_{t}(\omega )=\omega _{t}\). In order to give some intuition and to identify necessary conditions for the sets \(\Omega \), \(\Omega ^{*}\) and the function \(g\), we first give two counterexamples.
Example 3.1
Let \(d=1\), \(T=1\) and \((\Omega , \mathcal{F})=(\mathbb{R}_{+}\setminus \{0\}, \mathcal{B}( \mathbb{R}_{+}\setminus \{0\}))\). We set \(S_{0}=2\) and \(S_{1}(\omega )= 2+\omega \). Then \(\Omega ^{*}=\emptyset \) and trivially

3.2 Notions of arbitrage: an overview of robust financial modelling

One of the most important underlying concepts in financial mathematics is the absence of arbitrage. In the literature on robust pricing and hedging, many notions of arbitrage have been proposed to date. The aim of this section is to provide a comprehensive list of these different notions in a unified manner to facilitate their direct comparison and to discuss their relative dependencies. This could potentially offer an important point of reference for researchers in the field. To complement the picture, we establish some new technical results.
In this section, we work with a more general set \(\Phi = \{\phi _{\lambda } : \lambda \in \Lambda \}\) of options for static trading; in particular, \(\Phi \) need not be finite. However, we only allow trading positions \(h\) which hold finitely many of these assets; so \(h\in c_{00}(\Lambda )\), the space of sequences of reals indexed by \(\Lambda \) with only finitely many non-zero elements. As before, \(h\in c_{00}(\Lambda )\) generates the payoff \(h \cdot \Phi =\sum _{\lambda \in \Lambda } h_{\lambda }\phi _{\lambda }\) at time \(T\). We also adapt the notation for admissible trading strategies to be \(\mathcal {A}_{\Phi }(\mathbb {F}):=c_{00}(\Lambda )\times \mathcal{H}( \mathbb{F})\). The following complements Definitions 2.3 and 2.6, where the notions of 1pA( \(\Omega \)), SA( \(\Omega \)), A( \(\mathfrak{P}\)), IntA( \(\mathfrak{P}\)) were introduced.
Definition 3.11
Fix a filtration \(\mathbb{F}\) and sets \(\mathfrak{P}\subseteq \mathcal{P}(X)\) and \(\Omega \subseteq X\).
– OA( \(\Omega \)): An open arbitrage (see Riedel [ 34]) is a strategy \((h,H) \in \mathcal {A}_{\Phi }(\mathbb {F})\) such that

We thank Matteo Burzoni for his helpful remarks and comments. Johannes Wiesel further acknowledges support from the German Academic Scholarship Foundation. Part of this research was carried out while Jan Obłój was visiting the Sydney Mathematical Research Institute and he gratefully acknowledges their hospitality.
Open Access This article is licensed under a Creative Commons Attribution 4.0 International License, which permits use, sharing, adaptation, distribution and reproduction in any medium or format, as long as you give appropriate credit to the original author(s) and the source, provide a link to the Creative Commons licence, and indicate if changes were made. The images or other third party material in this article are included in the article’s Creative Commons licence, unless indicated otherwise in a credit line to the material. If material is not included in the article’s Creative Commons licence and your intended use is not permitted by statutory regulation or exceeds the permitted use, you will need to obtain permission directly from the copyright holder. To view a copy of this licence, visit http://​creativecommons.​org/​licenses/​by/​4.​0/​. 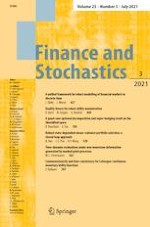