Much has been written about the modern obesity epidemic, and historical BMIs are low compared with their modern counterparts. However, interpreting BMI variation is difficult because BMIs increase when weight increases or when stature decreases, and the two have different implications for human health. An alternative measure for net current nutritional conditions is body weight. After controlling for height, I find that African American and white weights decreased throughout the late nineteenth and early twentieth centuries. Farmers had greater average weights than workers in other occupations. Individuals from the South had taller statures, greater BMIs, and heavier weights than workers in other U.S. regions, indicating that even though the South had higher disease rates in the nineteenth century, it had better net nutritional conditions. 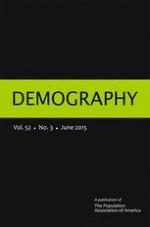 The Evolution of Occupational Segregation in the United States, 1940–2010: Gains and Losses of Gender–Race/Ethnicity Groups

Sexual Mixing in Shanghai: Are Heterosexual Contact Patterns Compatible With an HIV/AIDS Epidemic?

Erratum to: Sexual Mixing in Shanghai: Are Heterosexual Contact Patterns Compatible With an HIV/AIDS Epidemic?