AC electrical conductivity σac of PVA/PVP blend filled with MWCNTs was studied using impedance spectroscopy over a wide frequency range of 10−1 to 107 Hz at different fixed temperatures. It was observed that the frequency-dependent nature of the ac electrical conductivity followed the Jonscher’s law and the increasing of MWCNTs content in the polymeric matrix leads to form a percolating network through the composite. On the contrary, a conductivity reduction is observed for the composition of 5 wt% of MWCNTs, which may be ascribed to the aggregation occurred in nanotubes and consequently loss of percolation. The CBH model has been suggested to agree with the conduction mechanism of σac for the present system. Also, the maximum barrier height over which the electrons hop decreases with increasing temperature. Impedance data were studied in terms of electrical modulus formalisms M* and impedance formalisms Z*. The relation between real and imaginary parts of complex impedance shows an inclined spike at low frequency and a semicircular arc at high frequency with radius decrease with increasing the temperature and could be best fitted to two equivalent circuit models. The analysis of M″ and Z″ spectra indicates that the distribution of relaxation times is independent of the temperature. The non-coincidence of peaks corresponding to M″ and Z″ indicates the deviation of non-Deby relaxation and short-range movement of charge carriers. The activation energy values, which are determined from the bulk conductivity and electric modulus, are very close. 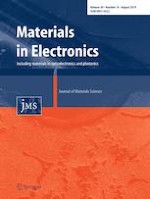 Effects of changes on temperature and fluorine concentration in the structural, optical and electrical properties of SnO2:F thin films

Influence of gamma irradiation exposure on structural, electrical and magnetic properties of Bi-2223 with Nb2O5 addition