Microstructural features and mechanical properties of an Al-Zn-Mg-Cu alloy processed by equal-channel angular pressing (ECAP) have been investigated. The equivalent plastic strain obtained from the simulation agrees well with that from the analytical calculation in a way that both increase with an increase in deformation, but the strain distribution is non-uniform, appearing as a strain gradient along the norm direction. Microstructure investigation shows that grain refinement is achieved in frequency of low-angle grain boundaries fabricated by ECAP. The pole density is reduced by ECAP, during which the Brass and Goss type textures are introduced. TEM results show chain-like recrystallized grains formed at the grain boundaries and broken second-phase particles come into being due to the heavy shear force. After ECAP, the hardness and strength increase significantly while the elongation is reduced. Besides, an extreme strengthening is confirmed because of the balance between dynamic hardening and softening. The microstructure evolution mechanism is revealed in terms of grain refinement, precipitate phase breakage and texture evolution. 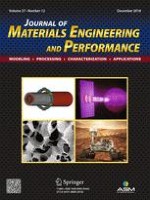 Formation and Decomposition Process of the Filled Skutterudite Smy(FexNi1−x)4Sb12 (0.40 ≤ x ≤ 1) as Revealed by Differential Thermal Analysis