To explore the acoustic emission (AE) characteristics of rock materials during the deformation and failure process under periodic loads, a uniaxial cyclic loading and unloading compression experiment was conducted based on an MTS 815 rock mechanics test system and an AE21C acoustic emissions test system. The relationships among stress, strain, AE activity, accumulated AE activity and duration for 180 rock specimens under 36 loading and unloading rates were established. The cyclic AE evolutionary laws with rock stress–strain variation at loading and unloading stages were analyzed. The Kaiser and Felicity effects of rock AE activity were disclosed, and the impact of the significant increase in the scale of AE events on the Felicity effect was discussed. It was observed that the AE characteristics are closely related to the stress–strain properties of rock materials and that they are affected by the developmental state and degree of internal microcracks. AE events occur in either the loading or unloading stages if the strain is greater than zero. Evolutionary laws of AE activity agree with changes in rock strain. Strain deformation is accompanied by AE activity, and the density and intensity of AE events directly reflect the damage degree of the rock mass. The Kaiser effect exists in the linear elastic stage of rock material, and the Felicity effect is effective in the plastic yield and post-peak failure stages, which are divided by the elastic yield strength. This study suggests that the stress level needed to determine a significant increase in AE activity was 70% of the i + 1 peak stress. The Felicity ratio of rock specimens decreases with the growth of loading–unloading cycles. The cycle magnitude and variation of the Felicity effect, in which loading and unloading rates play a weak role, are almost consistent. 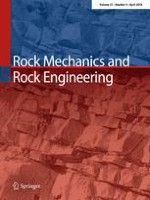