We compared the rate of acquisition and strength of retention of conditioned context aversion (CCA) with conditioned taste aversion (CTA) using pigmented, genetically heterogeneous mice (derived from Large and Small strains). Extending previous findings, in Experiment 1, mice accustomed to drinking from large glass bottles in the colony room learned to avoid graduated tubes after a single conditioning trial when drinking from these novel tubes was paired with injections of LiCl. The results also showed that CCA could be developed even when there was a 30-minute delay between conditioned stimulus and unconditioned stimulus. Retention of the aversion lasted for 4 weeks in both Immediate and Delay groups. Studies of conditioned saccharin aversion were conducted in Experiment 2. CTA acquisition was very similar to that observed in CCA and duration of aversion retention was similar in the CCA and CTA Delay groups, although at least 2 weeks longer in the Immediate group. Thus, CCA acquisition and retention characteristics are closer to those seen for CTA than has previously been reported. In Experiment 3, we examined whether albino mice (which are known to have weaker visual abilities compared to pigmented mice) would develop CCA comparable to those of pigmented mice. The development of conditioned aversion and its duration of retention was similar in albinos and pigmented mice. Nonspecific aversion emerged as an important contributor to strength of aversion during retention trials in both CCA and CTA paradigms with pigmented (but not albino) mice and deserves additional scrutiny in this field of inquiry.

Titel
Acquisition and retention of conditioned aversions to context and taste in laboratory mice
Autoren:
Sezen Kislal
David A. Blizard 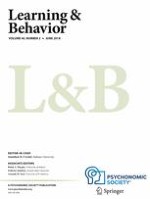 Retrieval practice after multiple context changes, but not long retention intervals, reduces the impact of a final context change on instrumental behavior