In nondestructive defect characterization, the genetic algorithm matches measurements to computations through finite element optimization of a parametrically described defect. This poses a huge computational load. A published element-by-element (EbE) conjugate gradients (CG) method for the graphics processing unit (GPU) parallelizes the matrix solution process. However, in finite element optimization for non-destructive evaluation (NDE), thousands of simultaneous finite element matrix solutions on parallel genetic algorithm threads on a GPU are required. This challenges the memory capabilities of a GPU and results in long waiting times making the NDE technique impracticable. To address these twin time and memory problems, we revive an old EbE processing by Gauss iterations. It yields speedups of 80+ which grow indefinitely with matrix size to values much bigger than those reported for EbE CG. For the latter the reported figures were less than 4 for the practicable matrix size of 91,333, and 96 for a size of over 1 million and falling thereafter. Our EbE implementation of CG gives a speedup of 147 for first order triangular meshes. No memory issues are faced. 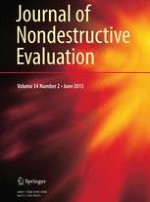 Improvement of SAFT by Implementation of Approximate Wave Solution in Fluid-Solid Two-Phase Media: A Case Study on Imaging of Aluminum Rod with Side-Drilled Holes