There are many reports of NO3 − violating safety standards in the neighboring areas of concentrated animal feeding operations (CAFOs), which have become the bottleneck of the CAFOs development. The high concentration of ammonium nitrogen (NH4 +-N), which transforms into nitrate nitrogen (NO3 −-N) through nitrification, and then leaches into the groundwater, is a potential threat to the environment. Adsorption and desorption characteristics of ammonium can reduce the amount of NH4 +-N in soils, which effectively prevents or slows down the nitrate leaching. Researches on the adsorption and desorption of ammonium mainly focus on the simple NH4 + solution. Researches on the adsorption and desorption from hogpen wastewater are few, which is a complex system coexisting with many ions. In this paper, ammonium was selected as the object of pollutant, a batch of equilibration experiments was conducted to evaluate the adsorption–desorption and its kinetics in eight loams, typically found in Northern China, irrigated with original wastewater (OW) and reclaimed wastewater (RW) from intensive hogpen and a simple one consisting of clean water (CW). This study showed that the Freundlich and Langmuir model described the ammonium adsorption properties very well in multi-ion coexistensive system of hogpen wastewater; the ammonium adsorbed amount in the corresponding matrices followed by OW < RW < CW tendency, although the adsorption model parameters had great diversity. The adsorbed amount increased as the adsorption time went on and then approached to a stable state. CW had the shortest reaction time to reach equilibrium, whereas OW had the longest. The normal adsorption kinetics equation could not depict the adsorption behavior of loams but characterized by the ExpAssoc equation well. The study could provide references for the wastewater treatment and recycling, and rural water pollution controlling. 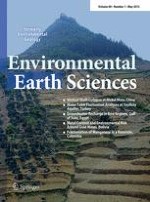 Evaluation of the potential impact of fluorine-rich fertilizers on the Guarani Aquifer System, Rio Grande do Sul, Southern Brazil

Estimation of groundwater recharge in arid, data scarce regions; an approach as applied in the El Hawashyia basin and Ghazala sub-basin (Gulf of Suez, Egypt)