Zeolite crystals with cations present, such as ZSM-5, are widely used for gas sequestration, separations, and catalysis. One possible application is as an adsorbent to separate CO2 from N2 in flue gas mixtures. Typically, the zeolite framework is of a SiO2 composition, but tetravalent Si atoms can be replaced with trivalent Al atoms. This change in valence creates a charge deficit, requiring cations to maintain the charge balance. Experimental studies have demonstrated that cations enhance adsorption of polar molecules due to strong electrostatic interactions. While numerous adsorption studies have been performed for silicalite-1, the all-silica form of ZSM-5, fewer studies on ZSM-5 have been performed. Grand Canonical Monte Carlo simulations were used to study adsorption of CO2 and N2 in Na–ZSM-5 at T = 308 K, which is ZSM-5 with Na+ counter-ions present. The simulations suggest that a lower Si/Al ratio (or higher Na+ and Al content) substantially increases adsorption at low pressures. At high pressures, however, the effect of the Al substitutions is minor, because the Al−/Na+ sites are saturated with guest molecules. Similarly, a lower Si/Al ratio also increases the isosteric heat of adsorption at low loading, but the isosteric heats approach the silicalite-1 reference values at higher loadings. Comparison of simulations and experimental measurements of the adsorption isotherms and isosteric heats points to the importance of carefully considering the role of charge on the Na+ cations, and suggest that the balancing cations in ZSM-5, here Na+, only have partial charges. 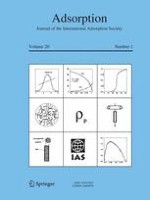 Development of oxygen selective adsorbents for gas separation and purification