Affirmative action programs are commonly used as a means to level the playing field for minority- and women-owned firms in public procurement markets, and therefore may be a positive factor in business entry and survival. To the extent that affirmative action programs also apply to traditional labor markets, however, they may alter the opportunity cost of starting a business. We utilize the elimination of affirmative action in California and Washington States through voter initiatives to identify the effect of affirmative action on minority and female self-employment rates. In our base specifications, we find evidence of modest increases in self-employment among minorities and women in both California and Washington after elimination of affirmative action, consistent with the hypothesis that the opportunity cost of starting a business fell due to restricting opportunities in the traditional labor markets. The sign of the estimated effect, however, is not uniformly positive when considering specific race/gender groups, and the statistical significance of the main results is somewhat sensitive to the choice of control states. 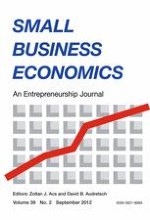 How does working capital management affect the profitability of Spanish SMEs?

Entrepreneurship in India: the question of occupational transition

Firm growth and barriers to growth among small firms in India

Quantity and quality of information and SME financial structure